With the dogs and cats that we see with fractures or dislocations there are so many bones and so many joints and so many different ways in which they can be damaged, a really interesting part of orthopaedics is in defining exactly what injury has occurred and making a plan to deal with it.

Murph, a two year old cat, was brought in one Monday morning with a lameness of his front right leg. The previous day he had stayed out much later than usual presumably because it was difficult for him to  return home  with his injury and also when he did get back he would have struggled to open the cat flap.

He was very good in allowing me to handle his painful leg and so I was able to ascertain that the problem was in his wrist (carpus) and that the foot could be moved upwards to an excessive degree. He was anaesthetised and X-Rays were taken with the joint positioned with this excess movement in order to find out at what level the damage had occurred. There are three joints in this area: the first is between the carpus and the forearm, which accounts for the majority of the movement; the second is between the two layers of carpal bones; the third is between the carpus and the bones (metacarpals) going down to the toes. The X-Ray clearly showed that it was the third joint that was abnormal and that the other two were undamaged.

One cannot repair the structures that had been damaged so the only way to make this joint stable again is to fuse the joint, which requires the cartilage to be stripped and then the bones to be immobilised whilst the gaps are bridged with new bone. As the area was swollen, the leg was splinted and the operation was delayed for four days to give time for the swelling to subside. As it happens there was an evening meeting for orthopaedic surgeons prior to this, so the opportunity was taken to discuss the plan for Murph’s operation with a specialist. Only one of them had dealt with this specific injury, however, which emphasised how unusual it was. They agreed with our plan for the repair.

The cartilage of the joints at the second and third level were stripped with a burr that was powered by compressed air. The tricky bit was to stabilise this area. Pins needed to be driven up two of the metacarpal bones and through the two layers of carpal bones. The pins could only be 0.9mm thick to fit in the cavity of the metacarpals. In order to get the angle flat enough to drive them up from the far end of these bones a slot had to be made in the top surface of both of them. The pins had to be driven up far enough for stabilisation but stop short of the first joint.

The operation went well and the repair was supported with a splint. Murph will need to be cage rested for a number of weeks. Once X-Rays show that the joints are fused the splint can come off and he can be confined to a room until his muscles have built up again. He should then have good, pain free, movement in his wrist and be able to go back to normal activity. 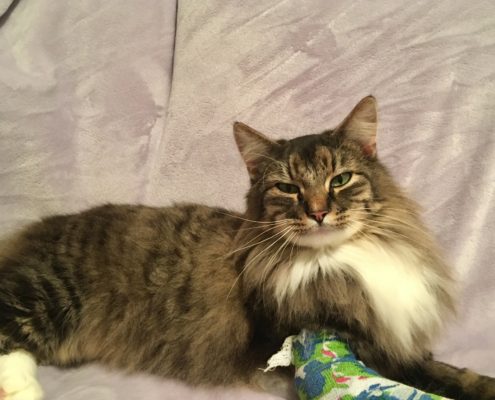 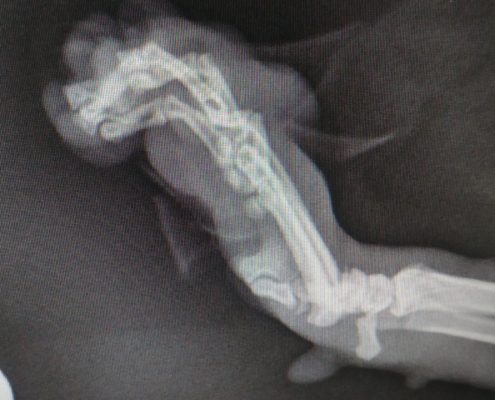 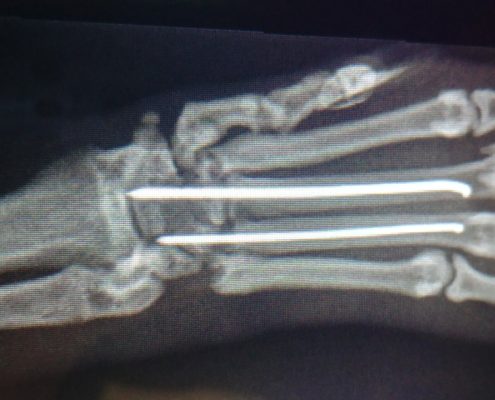 What to take when travelling with your pets…

What are Pet Health Plans all about?
Scroll to top