Vomiting is a common clinical sign in dogs. Often this is due to the prosaically termed “dietary indiscretion” which is another way of saying that they have eaten something really revolting! This can contain toxins or bacteria which can inflame the stomach (gastritis) and often the intestines as well (gastroenteritis). When the intestines are involved there will also be diarrhoea.

When vomiting occurs without diarrhoea we have to consider a range of possible causes in addition to gastritis. These include liver, pancreas or kidney problems; metabolic disorders like Addison’s disease or diabetes; a foreign body in the stomach or intestines, or tumours. When diarrhoea is also present the problem is normally restricted to the gastrointestinal tract and the list of possible causes is smaller. The degree to which we investigate a pet will take into account the severity of signs, how well they are and the owner’s assessment of likelihood of foreign body ingestion.

Ellie, an adorable six month old Border terrier cross, was brought in at the end of July because she had vomited eight times through the night and had also passed watery diarrhoea. Being small and slim it was easier than in some dogs to palpate her abdomen. I thought that I could feel something hard in the area of the stomach or the first part of her intestine, the duodenum. She was very lethargic so was taken in to be put on an intravenous drip and for this area to be X-Rayed. This showed that there was a large foreign body in the stomach. It looked too large to be removed via an endoscope passed down from the mouth, so Ellie underwent surgery to take it out. It was found to be a mat of long brown hair, with grass wrapped within it. Grass is often eaten by a dog that feels nauseous. The mat had obviously built up over a number of weeks as it was moulded to the shape of the stomach and was occupying a space that was about half of the maximum possible distension of the stomach. Normally a gastric foreign body does not make a dog unwell and only causes infrequent vomiting, so the intestines were closely inspected in case there were additional problems but all was normal.  After the operation Ellie quickly recovered and did not have any more vomiting or diarrhoea.

It was important for us to understand where the hair had come from in order to prevent a recurrence. Ellie’s owner said that hair was always getting wrapped around the spinning part of the vacuum cleaner. This came from the inevitable loss onto the floor when the long hair of family members was brushed. It was likely that Ellie was then ingesting it when she chewed treats on the carpet. From now on hair will be brushed upstairs and Ellie will have her treats on a wipeable surface. 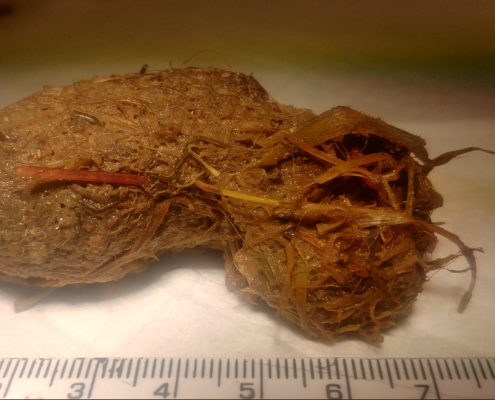 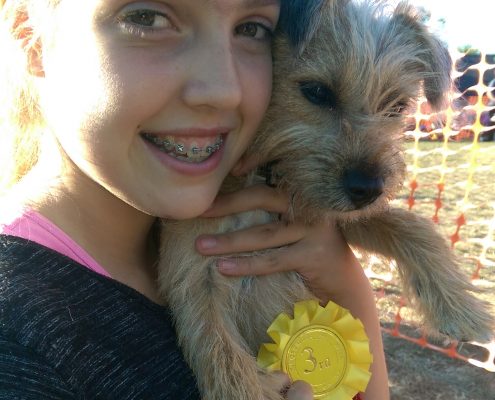