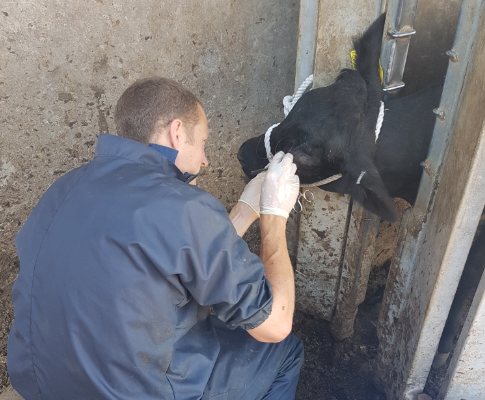 You know what you call a fish if it’s had an eye removed? A Fsh!

By the logic of that old joke, one of the bovines I saw recently should really be called a bovne! It was a four month old calf, one of whose eyes had been very badly damaged by a bacterial infection called New Forest Eye, so much so that the calf could no longer see out of that eye, and the front of the eyeball had become so deformed that the eyelids could no longer close properly. Unfortunately, in this kind of situation, the eye is beyond repair. Although we would always do everything in our power to save an animal’s eye, we know that a painful, non-visual eye is worse than no eye at all. Plus, most animals cope really well after an “enucleation” operation to remove the damaged eye.

I’m not sure why, but the New Forest seems to have quite a bad name when it comes to animal diseases -many of you will remember that Alabama Rot, the horrible new disease of dogs, was originally called “New Forest Disease” too, because that’s where the first cases of it were seen in this country. New Forest Eye in cattle is caused by a bug called Moraxella bovis. If spotted early, it can be treated with antibiotic eye cream, or by an antibiotic injection in the eyelid. However, it can rapidly spread through a herd, carried between cattle by flies, or in dusty/windy conditions. This means fly control is really important in stopping the spread of the disease, but as many of you will be only too aware, flies have been a real menace to livestock this summer.

Fortunately, our calf didn’t seem at all put out by having the enucleation operation, and has gone on to live a healthy, pain-free one-eyed life.

Back to Interesting Cases
CPR with the fire service