When you see her, one would never guess that Daphne, an eight year old Bichon Frise, has struggled with a rubber glove fetish most of her life. Six years ago she went off her food for a few days, vomited many times and got progressively more ill.  When she was brought in the vet could feel a foreign body in her intestines, so she was anaesthetised and the abdomen opened up to investigate the problem (exploratory laparotomy). A blockage was confirmed and a glove was removed via an incision into the gut (enterotomy). Daphne was kept in on a drip and after a couple of days, when she was eating and drinking, she was allowed home to recuperate.

The type of glove she had eaten was medical, as these were being used in the care of an elderly person in the house. There were a few more incidents after this when, despite trying to make them inaccessible to her, she still managed to eat one. Fortunately these managed to make their way right through the gut and were seen in her motions.

There were then a few years where no gloves were used in the house and Daphne’s obsession remained unsatisfied. She lives on a farm, however, and during this time similar gloves were being used in the milking parlour, but great care was taken to safely dispose them after use and not bring them back to the house.

Recently, over a period of a couple of weeks, she was seen to have the occasional vomit.  The vomiting then increased in frequency and she became very poorly in just a few hours.  She was brought in and an X-Ray revealed a localised area of abnormal shadowing. An exploratory laparotomy was performed and a blockage was found.  It was not too surprising when this was found to be caused by a glove. It was of the type that was used in the milking parlour but had become very hard and brittle, consistent with it having been in the stomach for a while before passing into the intestines, which is when her condition worsened. The intestines that the glove had moved through, and where it had then become stuck, were very bruised and these were watched by the vet for quite a while to make sure that the normal wave of muscular activity (peristalsis) was occurring here. It can sometimes be difficult to decide whether part of the intestine has been devitalised and would therefore need to be removed (enterectomy). In Daphne’s case it was decided that the blood supply was OK. The incision in the intestine was sutured and she recovered well and went home two days later. When she came in to have her stitches taken out earlier this week she was back to her normal self.

It is assumed that the person who was milking the cows inadvertently put the gloves into the pocket of their overalls and one must have fallen out in the cloakroom in the house. Daphne did not squander that opportunity!

It is strange that dogs are so keen to eat things that are not nutritious and also potentially life-threatening.  Two days before Daphne’s operation we were endoscopically removing items of personal hygiene from the stomach of one dog, and three days after were surgically removing a stone from the intestines of another. Although vomiting can be associated with many diseases, the thought that our patient may have ingested a foreign body is always high on the list! 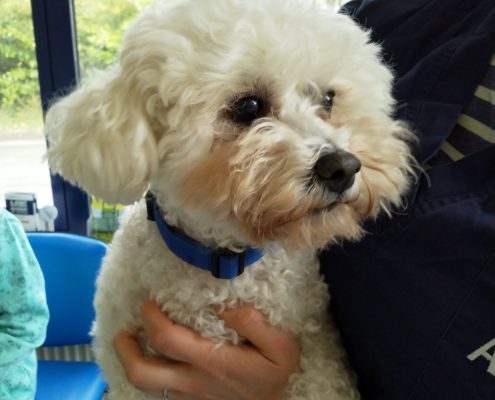 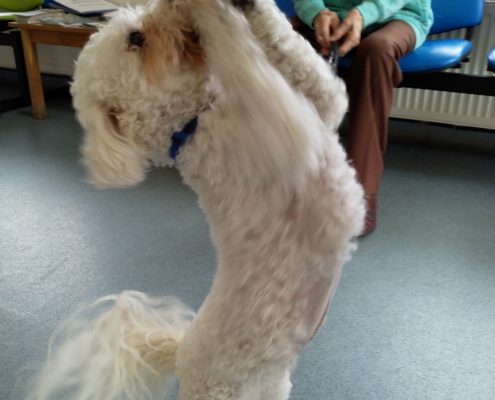 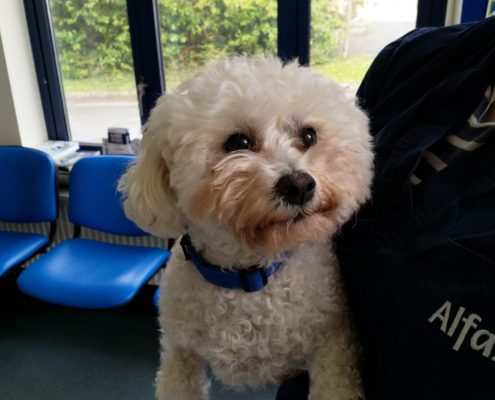 What are Pet Health Plans all about?