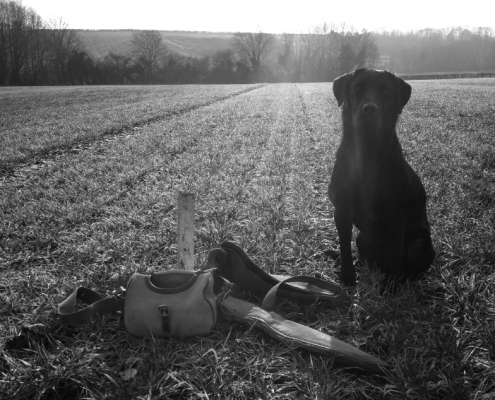 When a pet, horse or farm animal is presented to us with a particular sign we will immediately consider the range of diseases that could cause that sign – the differential diagnosis. If there are a number of signs then the list of possible diseases is likely to be smaller or, indeed, there may be only one possible cause.

Jack, a  working Labrador, was brought in to see me when he was two years old, as he had just had what was described as a wobbly episode, or possibly a fit, when he was exercising. He had fully recovered by the time he came in and looked very fit and healthy.

This presentation in a dog of Jack’s age made me consider the possibility of a heart problem, low blood glucose, epilepsy, or a brain problem secondary to liver problems (hepatic encephalopathy).  An additional consideration in Labradors (and Chesapeake Bay Retrievers, Curly-coated Retrievers, Border Collies, and Pembroke Corgis) is that they may be carrying two copies of a mutation of a gene (the Dynamin 1 gene) as this is associated with collapse during intense exercise.

There was no heart murmur or unusual rate or rhythm that I could hear, which made the heart an unlikely cause. Hepatic encephalopathy would normally be due to an abnormal blood supply – a shunt – that bypasses the liver allowing toxic substances into the general circulation, which can cause odd behaviour, fits, circling, blindness, or pressing the head against a wall. It is normally associated with poor growth which made this an unlikely explanation in well-toned Jack. Epilepsy was a possibility as an affected dog usually has their first fit between six months and six years of age. They almost always occur at rest, however. A blood sample taken during the consultation showed a subnormal glucose level (hypoglycaemia). This was likely to have been even lower when Jack collapsed, and to be the reason for it. Hypoglycaemia can be seen in a normal dog that is simply working too hard, or can be from an excess of insulin in the blood due to a tumour in the pancreas which occurs in middle-aged and older dogs and causes a large appetite and weight gain. Jack’s hypoglcaemia was therefore likely to be simply exercise related, an idea that was also supported by him having a normal glucose level when sampled at rest.

Jack’s problem was improved, but not eradicated, by feeding small frequent amounts of a high protein, high fat and complex carbohydrate diet. We could have run more tests but his owner decided that Jack would be able to cope with his problem better if he was rehomed to a non-working pet environment which, unfortunately, was a long way away. We understand that more tests were carried out there, but do not know if these included insulin levels or genetic testing. He continues to have collapsing episodes but is thoroughly enjoying his easier lifestyle, which includes the use of his own sofa and a pond that has had steps put in it so he can safely use it as a plunge pool!

The diagnosis of an illness can often be quite convoluted, and requires the vet to also have a good blood glucose and brain activity – and plenty of caffeine!

Back to Interesting Cases
Bozo’s Story