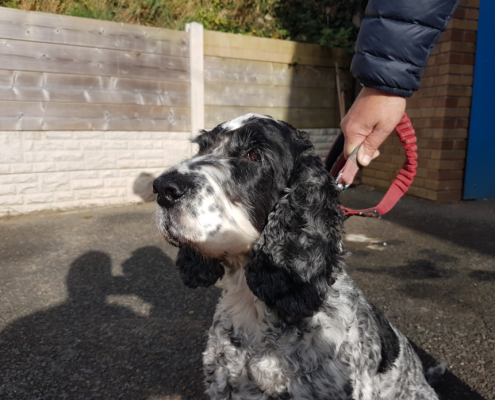 A frequent reason for an owner to book a consultation is to get our opinion on a lump that they have found on their pet.

We are often able to get a good idea of the nature of the lump from its position, its rate of growth, its feel, and whether it is painful. Usually, it is a good sign if it is painful as this is often due to an infection, and the lump can then be cleared with antibiotics. Examples of this include cat bite abscesses and infected tick bites. Unfortunately, though, there are a small number of malignant tumours that are painful, such as bone tumours and a rare form of mammary tumour.

Even if the lump is not painful, there can still be benign reasons for this. It could be a hernia, where tissues or organs that should be contained behind the muscular abdominal wall come to lie just under the skin. The sites where there is a potential hole that allows this are the belly button (an umbilical hernia) and the groin (an inguinal hernia). The abdominal contents can also form a lump under the skin if the muscle ruptures. This can be due to trauma, breakdown of a surgical incision or, in male dogs, when the muscles near the bottom become weak. In the latter case, the resultant swelling often contains a deviation of the rectum but it can contain the bladder and an observant owner may see the swelling get smaller as the dog urinates.

A non-painful lump can also be a cyst. This usually contains a clear watery fluid that can be drawn out through a needle, but it can also contain thick waxy material or even saliva if the cyst is under the chin.

Many of these lumps will be tumours, however. A tumour, or growth, occurs when a cell keeps dividing when it shouldn’t. They can vary from being benign and slow-growing, through to an aggressive malignant one that has the potential to spread to other parts of the body.

We can attempt to get more information about the tumour by aspirating some cells from it using a syringe and needle. Whilst this is simple to perform, the results can be equivocal. A tissue biopsy is more likely to yield results but requires an anaesthetic, so rather than just biopsy under the anaesthetic we would usually completely remove the tumour and then send it for analysis. The information of the cell type and degree of malignancy that we get from the aspirate or the whole tumour will tell us whether we need to be looking for a potential spread with ultrasound, X-Ray or with our CT scanner.

Last week I saw a number of dogs with lumps. One was a Border Collie that had been referred to an oncologist for investigation and lump removal after we identified a Mast Cell tumour from an aspirate. Another was a Labrador who had a large lump behind her wrist. To remove this would require a difficult dissection so he is going to come in for a biopsy first. There was also a Springer Spaniel who had nine benign fatty lumps removed a year ago. He had a new crop of small ones growing but also had a much larger one over his knee which we will remove.

Mitch (pictured) is a ten year old Cocker Spaniel. He had a soft lump beside his bottom that had been slowly growing over three years and which was now pressing on his rectum, causing misshapen motions. I removed the fatty lump (lipoma) last week and he can now pass normal faeces. After his operation the space that was occupied by the tumour filled up with blood but this will form a clot and be resorbed over the next couple of weeks.

There is a great variety of response to the finding of a lump – the one constant, though, is that they should always be checked out.

Back to Interesting Cases
Dental Month in November…